Since 1957 Aberdeen Scouts have been riding along on the crest of a wave and entertaining Aberdeenshire audiences in a range of venues such as His Majesty's Theatre Aberdeen, The Tivoli, Aberdeen High School for Girls (now Harlaw Academy), Hilton College and now the Aberdeen Arts Centre in King Street. 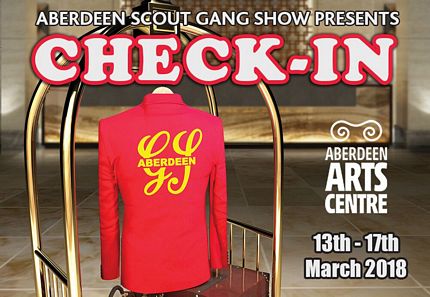 The sets, performances and scripts for the Aberdeen Scout Gang Show are professionally produced making for an entertaining performance. The Aberdeen Gangshows are of such a high standard that they were awarded the much coveted red scarf by Gang Show founder Ralph Reader in 1960. This entitles each Cub, Scout, Explorer, Scout Leader and Venture Scout who performs at a Gang Show to wear a red neckerchief scarf. By keeping the performances to a high standard the Aberdeen Scouting movement have retained their red necker status.

Each performance of the Aberdeen Scout Gang Show has a range of comedy sketches, songs and dances.


The Aberdeen Gang Show 2018 takes place from 13 to 17 March at the Aberdeen Arts Centre on King Street. The theme is Check-In.


You can buy a ticket from the Aberdeen Box Office.

Visit the Aberdeen Gangshow Website home page at www.aberdeengangshow.co.uk for more information, to read a history of the Aberdeen Gang Show and see some photographs of the current and past shows.