Review and details of the Aberdeen edition of the monopoly board game with the landmarks and streets used and where to buy the Aberdeen monopoly games:

Parker Brothers and Hasbro, the manufacturers of Monopoly, have made an official Aberdeen edition of the popular Monopoly property trading board game. It is licensed to Winning Games to make, they are the company behind Top Trumps card games. This limited edition version of the authorised Opoly game is reviewed on this page:

Buy the Aberdeen Monopoly Board Game.

Aberdeen Monopoly includes 32 places in Aberdeen including streets and roads such as Union Street and Aberdeenshire landmarks such as the home of Aberdeen Football Club, Pittodrie Stadium. The box is attractively decorated with historical buildings, the stunning architecture, landmarks and scenes from Aberdeen City and Aberdeenshire such as Marischal College back lit at night, photos of Old Aberdeen, Pittodrie, the Grampian Eye, Sir William Wallace statue, the Bridge of Dee and the Aberdeen Exhibition and Conference Centre. Aberdeen events in the cover picture include boating at the Duthie Park, Highland Dancing and re-enactments of jousting at the Castles. This is further described below in the playing Aberdeen monopoly section.


Where To Buy Aberdeen Monopoly Games 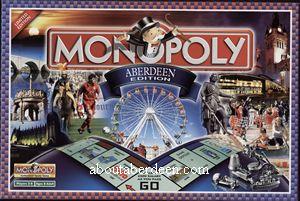 sell the Aberdeen Monopoly Game at a discounted price with free delivery. Click To Buy Now. 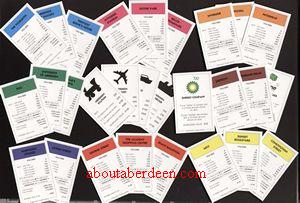 The square of each property has a beautiful illustration, picture, logo, emblem or photo of each Aberdeen building, company, public amenity, transport, park or street. 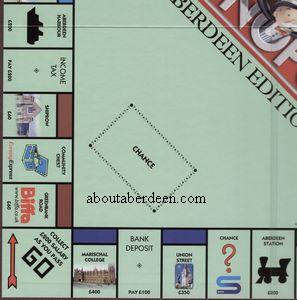 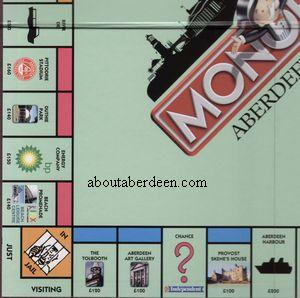 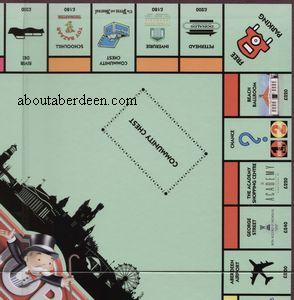 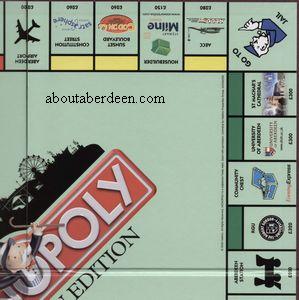 
There are 16 community chest cards in Aberdeen monopoly with tasks such as "Pay Hospital", "Win a family day out at Codona's Amusement Park", "Win a year's supply of energy from BP, "You have won second prize in a beauty contest", "Income Tax refund, "Bank pays you dividend", "Advance to go", "Doctor's fee", "It is your birthday collect from each player", "Pay a fine or take a chance", "Receive interest on 7% preference shares", "Congratulations you have won a RGU sport scholarship receive", "Pay your insurance premium" and "The AECC lets you hold a free event".

The squares of the community chest cards on the Aberdeen monopoly board game are occupied by The Evening Express newspaper and The Press and Journal morning newspaper.


There are 16 chance cards in Aberdeen monopoly with tasks such as "Advance to George Street. If you pass go", "Get out of jail free. This card may be kept until needed or sold", "Speeding Fine", "You have won a crossword competition", "Go to jail, move directly to jail, do not pass go, do not collect", "Your building loan matures receive", "Go back three spaces" "Pay school fees", "Drunk in charge fine", "Bank pays you dividend", "Advance to go" and "You are assessed for street repairs".


The media theme continues with these cards. The squares of the chance cards on the Aberdeen monopoly board game are occupied by The Independent paper,, Northsound Radio Station 1 and Northsound2 and the last square is owned by STV television. 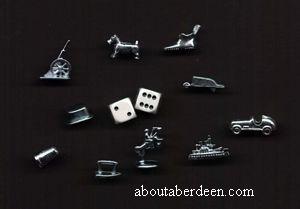 Replacing or staying the same as the tradition monopoly pieces of an iron, West Highland Terrier westie dog, racing car, top hat, boot, thimble, battleship, (deluxe monopoly editions also have a horse and rider, train, wheelbarrow, sack of money and a cannon) are:


The traditional pieces are made from silver coloured metal, the Aberdeen version is made from the same material. It had been hoped that the Aberdeen limited edition Monopoly board game would have pieces made from Granite. Sadly this did not happen, perhaps a deluxe edition may incorporate this.


Nominations for the highest property square, which on a traditional Monopoly board is Mayfair valued at ?400, included St Machar Cathedral, The Duthie Park, Marischal College, The AECC, Pittodrie Stadium, Union Street, The Art Gallery, The Bon Accord Centre and the City Council Town House. This much coveted prestigious square went to .

Aberdeen City is nicknamed The Granite City and the board game pieces such as the top hat, dog and racing car are hoped to be made from granite rather than metal. It is also hoped to includes an oil rig and the Codona's Grampian Eye.


Rather than having a jail and players being told to go straight to jail and not to pass go players were going to be told to Go To Inverness or Dundee! Dundonians, proud of their City of Discovery, objected and the idea was dropped.

Another unpopular decision prior to the final version of the Aberdeen monopoly board game was to have the much loved Duthie Park as the cheapest property on the board which is traditionally home to the Old Kent Road. This is now Greenbank Road of the Industrial Estate in Altens.

Aberdonians were asked to vote for the top spot of Mayfair and nominations were received for Pittodrie Stadium, Aberdeen Art Gallery, the Duthie Park, Provost Skene's House, the Beach Ballroom and the Tolbooth. Marischal College won with Pittodrie coming a close second.

The designer of the Aberdeen monopoly board game was Mark Marriot. 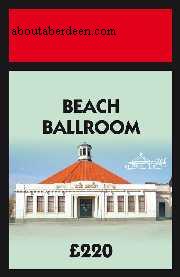 Aberdeen Monopoly is a board game for 2-8 players aged over eight years. The box is much smaller than traditional monopoly boards and measures 40cm in length by 27cm breadth so fits better into cupboards and drawers.


The monopoly playing board no longer folds into half but into quarters and measures 51cm square.

The centre of the Aberdeen monopoly playing board has a black background image of the famous landmarks of Aberdeen City and Old Aberdeen such as Girdleness Lighthouse, the Music Hall, Aberdeen Harbour and the Castlegate.

The object of the game is to buy, rent or sell local Aberdeen streets, shops and property to increase your wealth and to try and make your opponent players bankrupt.

Each player starts at the Go square, takes turn to throw the two dice and make their way around the Monopoly board, obeying the instructions on the Community Chest and Chance cards. You should avoid being sent to jail though landing on the just visiting square is harmless.

The full official rules of Monopoly are included in the Aberdeen edition. This includes the rules for the short game of Aberdeen Monopoly.


Other cities in Scotland to have their own editions of monopoly are Edinburgh and Glasgow.


Monopoly remains the worlds best selling family board game. The game is for 2 - 8 players from ages 8 years old to adult. Each player takes turns to roll the two six sided dice with the aim to make their way round the property board acquiring properties along the way whilst trying to avoid rent and penalties like paying tax or going to jail. As the game progresses players can trade, sell or buy properties with the aim to bankrupt their opponents.

The Monopoly game was named after the term for domination of the money markets by a single financier.

Monopoly was created in 1934 by Charles Darrow. He was a heating engineer from Pennsylvania who was unemployed because of the Great Depression. He invented monopoly because he saw a need for the promise of good fortune and prosperity in people's lives. The prototype of Monopoly game was based on Atlantic City. An oilskin was used as a playing board whilst buttons were the counters and painted wood chippings were the hotels and houses. Charles Darrow took his monopoly game to America's best know games company Parker Brothers of Salem. In the meantime a friend helped Charles Darrow to print 5000 editions of Monopoly which were sold in a Philadelphia department store. The playing pieces for the original Monopoly board games were designed from the charms that were worn on Charles Darrow's wife's charm bracelet. These first editions of the Monopoly game were so popular that they sold out and Charles Darrow and his printer friend could not cope with the demand so he sold the rights to the Monopoly game to the Parker Brothers and a legend in gaming was born.

In 1935 the Parker Brothers approached John Waddington Limited a UK company that specialised in card and board games. The head of Waddingtons, Victor Watson, agreed to sell the game within Britain provided there were changes such as dollars being changed to pounds and railroads becoming stations and the streets of America becoming London streets. And so the British version of Monopoly entered the history books and has remaining one of the UK's best selling board games. Victor Watson was convinced Monopoly would be a best seller when he gave it to his son Norman and he played the game non stop for three days. The British version of monopoly was created when Victor Watson and his secretary Marjory Phillips spent a weekend in London finding place names and landmarks for the board. For example they had lunch in the Angel Islington Lyons tea shop and choose this name for a blue square. The tea shop is now a Co-op bank and a plaque commemorates the name origin in the UK version of monopoly.

It is estimated that over 750 million people have played the Monopoly game.

Monopoly is sold in over 80 countries and is played in 26 different languages.

British prisoners of War in Germany during the Second World War were sent Monopoly sets by the Red Cross that contained real money and maps to help their escape.

The Monopoly logo is a man with a large moustache and top hat. He used to be called Mr Moneybags abut his name was changed to Mr Monopoly. He is based on the American banker, philanthropist and financier JP Morgan.

The man in the jail in Monopoly is called Jake the Jailbird.


The Evening Express newspaper ran a competition to win Aberdeen Monopoly board games.

Local stockists and local shops where you can purchase the Aberdeen Monopoly game:

Save yourself a shopping trip and get the cheapest price for Aberdeen Monopoly with free delivery at Amazon.