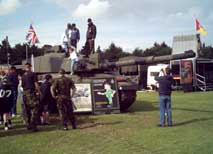 In June of each year, usually the 2nd Saturday of the month, the former Gordon Highlanders Barracks, Gordon Barracks, at Bridge of Don, holds a Military Show for the tri services of Army, Navy and RAF (Royal Air Force) along with the Territorial Army and Emergency Services such as the Police Force, Fire Service and Ambulance Service. Together they run special stands displaying their profession and role in today's armed and emergency forces. The arena holds special events and a timetable of when the races and each display is available at the entrance. Army, Navy and Royal Marine Cadets also hold displays and run special stands.

Stands And Exhibits At The Aberdeen Military Show

For example QARANC (Queen Alexandra's Royal Army Nursing Corps) and RAMC (Royal Army Medical Corps) have an area where you can talk to the nurses and doctors and have fake injuries made from their special make up.


The Royal Marines and the RAF regiment have special climbing walls for the children where they can safely do a spot of rope and rock climbing.

The Royal Tank Regiment bring along a few tanks, such as the Challenger 2 Tank, where you can climb aboard and have a guided tour.

The local regiment, The Highlanders (soon to become the Scottish Regiment) have many stands each year, the most popular being their display of rifles, guns, machine guns and other weapons. They also run popular laser and paintball shooting ranges.

There are fun fair rides and plenty of bouncy castles and assault courses - the ones run by the military are all free.

An ice-cream van and the Aberdeen Angus Catering van is usually there selling there local produce - I'd particularly recommend their venison steak burger.


Parking is free and the Bridge of Don Park and Ride is a short walk away.


Toilets are available at two a designated area of the barracks. These are porta toilets with special ones for disabled visitors. These are located on the site map leaflet you get handed on the way in.


Address and Telephone Number of The Aberdeen Military Show

2008 - I have yet to have confirmation if any future Military Shows will take place at the former Gordon Highlander barracks. Please check back at a later date.
2007 - There was no Aberdeen Military Show at the Gordons Barracks Bridge of Don.
2006 - Saturday 10th June
2005 - Saturday 11th June 11am until 5pm