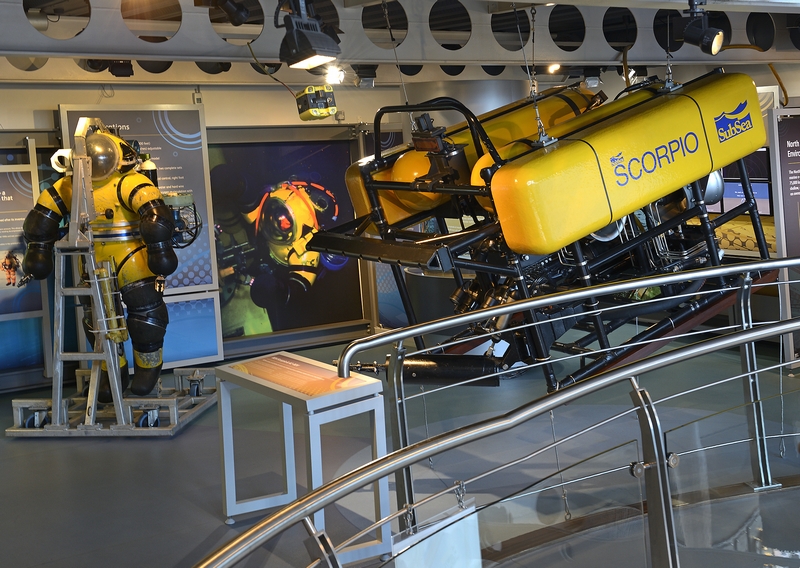 The Aberdeen Maritime Museum can be found just off Union Street and houses exhibits to show the history of our long association with fishing, the oil industry, the North Sea and the exploration of the Sea.

Admission is free and also gives you access to parts of the Provost Ross House. This was built in 1593.

There are plenty of interactive exhibitions which include DVD and Video showings. Other exhibits allow you to step onboard displays such as The Duthie Deckhouse steamer original frame and wooden interior or take control of an oil platform.

Each display has an information board. This includes quoted reminiscences of fisherman who describe their working and living lives through the years. This extends to quotes from their wives.

The original Rattray Head lens apparatus is on display. This was still in complete working order until the lighthouse was automated in 1982.

Other displays include the Newt Diving Suit, whalers' harpoons, oil rigs, platforms, 14th Century jugs from Holland, Elephant tusks which were thought to have been Mammoth tusks and the names of all the ships built in the area.

Scattered throughout the building are original oil paintings with some beautiful pictures of the harbour throughout the years. There are also some remarkably accurate models which include clipper ships.

The top floor offers visitors some great views of the harbour and Torry areas.

There is disabled access with a lift to each floor and ramps. Visitors with hearing difficulties can utilise the induction loop system in the auditorium. Toilets and a disabled toilet can be found on the second floor and on the ground floor.


There is a shop on the way out which sells a range of nautical gifts, souvenirs and books. Beside this is the Leading Lights Cafe which serves a range of hot and cold snacks, drinks and fresh home baked cakes. The cafe is named after the navigational towers at Torry.


It is closed on a Monday and the opening hours are:

Directions from Union Street: Take the lane called Adelphi. At the end turn left and follow the ramped pavement to the end which will bring you directly to it.

Directions from the harbour: Walk up the Shiprow and it can be seen just next to the Vue Cinema.

There is an NCP car park at the Shiprow, though if you intend to stay in the city you could use the Park and Ride at Bridge of Don. There is a bus stop near to its entrance.