Listings to Aberdeen Cinemas their facilities, prices, times and what's on and how to get them cheap or free 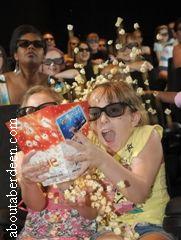 Our favourite Aberdeen cinema, can be found at Cineworld where we use our unlimited card to get to see as many movies as we like for a set monthly fee. The staff are always helpful and friendly and the hot dogs and popcorn is delicious. The sound system is superb and the seats ever so comfy. The advantage of seeing films here is that there are several restaurants on the same floor, so you can leave your car in their car park all day or well into the night.

This is valid for those who join Cineworld Unlimited which costs £17-90 a month thereafter but gives you the opportunity to watch as many movies as you like. You also get 10% off food and drinks and after 10 months membership you get premium membership which gives you free 3D movies and 25% off food and drink. This offer only applies if you join online at www.unlimitedcineworld.com


Click the links below to go to read about each Aberdeen cinema, check what's on, their prices and facilities:

Cheap cinema tickets can be found at Vue on a Sunday. These are on sale to see new film releases. These are known by them as Cheap Day Sunday tickets.

Our City boasts many and over the years there has been up to 19 at one time in 1939. Though many closed as televisions, videos and even DVDs became readily available. One such example is the Cosmo which was at Diamond Street and which closed in 1977. Several have stood the test of time and some have met the needs of a changing population.

The first opened in 1908. It was run by Dove Paterson in the Ship Row and was called The Gaiety Theatre. It is now known as the Vue Cinema Aberdeen.

The first animated picture show locally was a film about the coronation of the Tsar of Russia. It was shown in the Music Hall in September 1896.

The Casino Cinema was located on Wales Street adjacent to the Beach Boulevard and Constitution Lane. It opened in 1916 and closed in 1959. The building was demolished in 1971.

The Astoria Cinema was located in the car park and row of shops in Kittybrewster opposite the Northern Hotel. It was open between 1934 and 1967. It was one of only two cinemas in Aberdeen to have a theatre organ, the other being the Capitol. In 1967 the Astoria was turned into a bingo hall but closed four months later.

Torry used to have its own which opened in 1921. It was located on Crombie Road and closed in 1966.

We love to read the historical novels of Doris Davidson that are set in our area. She mentions this in the city centre in her novel Time Shall Reap


There is a photo of it at 120 Union Street from 1969 in The Granite Mile: The Story of Union Street

by Diane Morgan. The building, which dates back to 1836, was originally an Advocates' Hall for the Society of Advocates until they moved to Broad Street in 1872. Then Lockhart & Salmond the confectioners ran a restaurant in the building until 1882 when it became a Conservative Club. This is when the curved iron balcony was installed. Upstairs were renamed the Queen's Rooms, perhaps in recognition of the 1887 Golden Jubilee and saw a variety of uses such as auction and sales rooms, restaurants, and a billiard saloon.

The building was then converted into the Queen's Cinema and opened in 1913 and sold to James F Donald in 1927. A fire destroyed the interior in 1936 and it was refurbished. It closed in 1981. It was converted into a nightclub and reopened several times as Eagles, Legends and Espionage 007 nightclub.

. It was on Union Street.